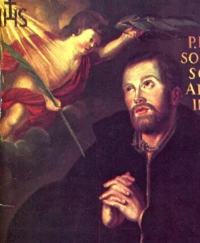 John Ogilvie's noble Scottish family was part Catholic and part Presbyterian. His father raised him as a Calvinist and sent him to the continent for education. There he became interested in the popular debates going on between Catholic and Calvinist scholars. Debates gave rise only to confusion, John turned to Scripture, two texts became his particular focus:-

"God wills all men to be saved and come to the knowledge of the truth."
"Come to me all you who are weary and find life burdensome, and I will refresh you."

John concluded that the Catholic Church could embrace all people so at the age of 17 in Louvain, Belgium in 1596 he was received into the Catholic Church. In 1610 he was ordained a priest as a member of the Jesuit Order. Sent to Scotland as a missionary, where, due to penal laws, he posed as a horse trader and soldier but was betrayed. Brought before the courts, his trial dragged on until he had been without food for 26 hours. Deprived of sleep for eight days and nights he was dragged around, prodded with sharp sticks and his hair pulled out. Still he refused to reveal the names of Catholics. He underwent a second and third trial but held firm. Even on the scaffold he was offered freedom and a fine living if he would deny his faith. His courage in prison and his martyrdom was reported throughout Scotland.

John Ogilvie was Canonised in 1976 following the miraculous cure of a Glasgow man John Fagan from cancer. He was the first Scottish saint since 1250.

Here are two short videos about St John Ogilvie's life (Part 1) and about the miraculous cure of John Fagan (Part 2). These are best viewed in full screen mode.